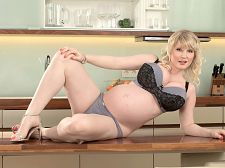 Casey Deluxe at nine-months pregnant told she’s even more into sex than ever previous to. Some poses thrill her much more than before and coz of the size of her bump, some positions have become more difficult. Doggie-style sex is even hotter. She’s indeed into the spooning position doggy style. She’d like to receive as much sex as she can and that depends on her spouse and how ready that Lothario can be.