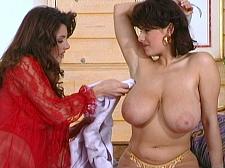 This is a very rare 1998 movie scene of Chloe Vevrier and Rocki Roads rencounter on-video. One of ’em has a razor in her hand, but it’s not what it sounds like. Rocki shaves the shaggy Chloe, removing her armpit hair, the hair around her butt-hole and trimming the hair around her cum-hole, leaving a nicely shaped cum-hole. Then the 2 chicks take turns going down on every other, touching with tongue their love tunnels to cum-town.