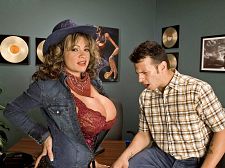 The plot of the SCORE feature episode Tits-A-Poppin’ is a little complicated and not unlike a Twilight Zone movie scene. With a lot of fucking.

The owner of a recording company gives his male executives a vial of liquid that gives ’em the telekinetic vigour to open a woman’s top so that their wobblers fall out. And when a girl’s fullsome funbags fall out of their top, this babe naturally desires to fuck. Now the recording industry is packed with hot hopefuls. Always has been, always will be. It is a never-ending parade, making it a fertile ground for bagging hot babes.

Denise Derringer from Texas and her Texas-sized milk shakes are here to try-out for a contract. Denise is truly a delightsome country-western honey and dresses the part for this meeting. Unlike the upstanding adult industry, the recording industry is rife with sleaze who make it a priority to try to bonk the woman talent.