Fuck the interview! Fuck her butt! 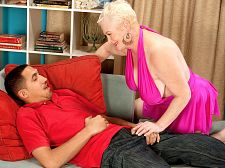 This was supposed to be an interview with white-haired 58-year-old Miriam Harding, but Miriam would rather shag than talk.

“I like sex,” she tells the interviewer. “I especially love engulfing cock. I like rogering, doggie especially. I like feeling a pecker going in me truly unfathomable, pounding me.”

She invites the interviewer to sit next to her on the couch. That babe displays him her bra buddies. “They’re mountainous,” this charmer says, wide-eyed with anticipation. For the record, her milk cans are G-cups. Are they real? Who cares? In advance of long, question and answer time is over, and Miriam is having the ladies man play with her areolas. Then this chab suggests her his knob, and this babe leans over to suck it.

“I not long ago had eight continuous hours of debauchery at my home,” said Miriam, who lives near San Diego, California. “It was fantastic.”