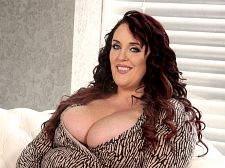 She’s many vixens in one buxom package and she carries the king-size sweatermeat that men would like to discharge their loads over. Ireland’s Carla4Garda is one lusty female, and she lactates too.

Carla4Garda talks bouncy bosoms, sex, bras, milking and more in this second chat. One of the brunette sexpot’s bigger than typical hobbies is bobbing for cops’ ramrods. The Gardai (Irish police officers) get her juicy and sexually excited. Jacking, engulfing and banging one of Them in the back seat of a car makes her dizzy with fun.

Watch More of Carla4Garda at XLGIRLS.COM!