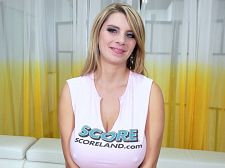 Returning ravishing heart Katarina Dubrova chats with our photographer in a uncommon movie scene. When SCORE went to Hungary in 2008, Katarina was part of a group of girls that did a luscious SCOREtv T-shirt game in SCOREtv Season 1 Movie 9 but this babe did not speak. This is the first time that Katarina’s chatted on-camera at SCORELAND. Her English is worthwhile and her voice is fashionable.